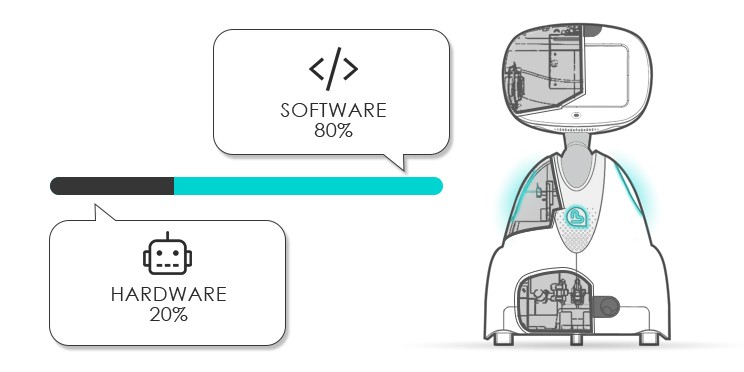 Depending on whom you ask, you’ll get different definitions of what a robot is; Some define a robot as a mechanism like appliances (your Vitamix for example); for others, it’s a computer program. Some believe a robot can be defined as both of these things.

This might explain why many people classify robots into the hardware family, even though actually more robots are designed with software rather than hardware. This software is what helps to create a more intelligent robot, with a more “ logical and capable brain.”

At Blue Frog Robotics, we work in the most innovative area of robotics, that’s why despite the love we have for smoothies, we can’t define appliances as robots.

Our definition of a robot is a computer that can SENSE, THINK, and MOVE all on ITS OWN.

Buddy collects the information he needs to make decisions via his sensors that perceive what’s around him (2D and 3D cameras for vision, microphones for audio perception, caresses sensors, and infrared sensors for distance estimation). These pick up all sorts of information including lights, images, sound, touch, pressure, and location.

Buddy uses lights, movements, a range of human-like expressions, natural language processing (NLP) and dialogue management to communicate with people and let them know how he is feeling and what he is thinking.

Using eye-gaze detection, face recognition, observation and imitation of other people’s actions, and cooperation, he recognizes the goals, intentions, desires, and beliefs of others. Buddy uses its own theory of mind to improve the interaction with his human users. For example, he is capable of reading the intentions of his owners and reacting appropriately to the emotional, attentional, and cognitive states of them in order to anticipate their reactions and modify its own behavior to satisfy their expectations and needs.

Buddy gets his brainpower through his control panel, like a brain and a central nervous system made with various circuit boards. His brain gives him capabilities for memory, computation, learning, and intelligence.

His artificial intelligence comes from his ability to acquire knowledge and skills and to be able to apply them in a specific way, such as to solve a problem or perform useful work. Via his sensors, he gathers information and is able to make decisions and act upon them, adapt to new tasks, and even take information and skills already learned and alter them to acquire new tasks.

Buddy moves about accurately, quickly, and smoothly on wheels. His moving body parts help him to communicate and perform various tasks.

To move, Buddy uses effectors (wheels and cameras/eyes) that allows him to produce an effect on the environment and actuators (motors) to produce a movement.

One of the key design principles in our research and development is autonomy, which means our Buddy is free to interact with and explore its environment. In contrast to robots whose decisions and actions are rigidly programmed in advance, or who are driven by a remote controller, Buddy can self-select his actions adaptively, in response to internal states and external environment sensoring.

Designing the behavioral and cognitive capabilities of Buddy is more related to a vocation than a normal job. Building the cognitive architecture intelligence and autonomous mentality of Buddy is not, of course, a walk in a park. There have been several hurdles along the way, including the small fact that Buddy is the first of his kind. Therefore, he has required a new combination of technologies. To develop our robots, we rely on a highly interdisciplinary effort of empirical developmental sciences such as developmental psychology, neuroscience, and comparative psychology; and computational and engineering disciplines such as robotics, artificial intelligence, machine learning, and deep learning. It is fundamentally a new science and technology that is being created. It is exciting as we are putting the human needs in the AI and hardware equation to create a complex machine incredibly useful that can help educate, entertain, and care.

The robot revolution is here to stay! Invest in the Future.

Robots are the next technological revolution. They will play a huge part in how customers interact with technology. Buddy is a disruptive and innovative robot that is about to transform the way we live, learn, utilize information, play, and even care about our health. He will become part of our everyday routine, helping improve our quality of life.

Blue Frog Robotics has envisioned a better world for the future of home living, and that vision is Buddy. With your help, the robot we have built will disrupt the traditional assistant device model with the first Smart, mobile, AND emotional personal robot at an affordable price.

Consumer robotics is a new market. Some people think it is a tough one. But we, at Blue Frog Robotics, think it is a path of learning, understanding, and finding new ways to serve the consumers. And We think, it is vital always to remember that sometimes to achieve extraordinary heights, you need to have patience, passion, and trust in the future. Especially when you build the future. Buddy is the future, let him better manage our lives, the space we live it, and make us smile.

Click to know more about Buddy and Blue Frog Robotics. 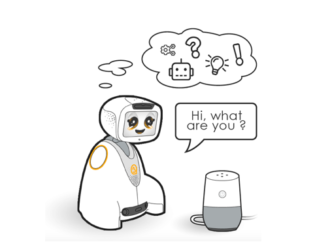 vamtam-theme-circle-post
 Category AI, Robot, Startup
If I ask my teenage nephew about the difference between Buddy "your Emotional Robot "...
Read More

Why we can’t compare an Emotional Robot and a Voice Only Personal Assistant Device?A short manual of counter-espionage bound for businesses ';